How Much is a Well Qualified Signup Worth? 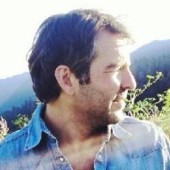 Are you facilitating a sale? Transaction value?
A lead is not worth much compared to a sale. A lead for a $12 movie ticket is not worth the same as a lead for a $5k family trip to Disneyland. Same goes for a paying customer. It's up to you to come up with the value and justify how much you're going to charge based on the value of the sale or potential sale as well as the market rate for your particular industry.
Also, you're speaking in future tense. I'm not sure any large company is going to sign up with you until your service is operating and has a base of users. Large companies are particularly risk averse. Sure, they'll be nice and encouraging but don't expect them to sign anything or give you money until whomever you're dealing with feels confident they won't lose their job over working with you.

The question to ask yourself is what is the value to the entertainment company. You need to figure out the business case so that using your service is more compelling and economical than what they are currently doing to acquire those users.

I have been in cable television marketing for more than thirty years and have worked with most of the major networks. I took some time to look at your website and see the value of the service to the subscriber as a convenience. It is my opinion that as a business, Shobot will need to look at other sources of revenue rather than the entertainment companies themselves.

There is a flaw in your assumption. You are not offering anything of value to the networks or the delivery system (cable satellite, etc.). By giving the consumer the ability to DVR from anywhere (which they already have from many cable companies via the cable company's website) the consumer then has the ability to time shift viewing and skip the commercials. On the other hand, the subscriber calling up the show on VOD requires viewing of the commercials which the cable network can then report as part of the program's ratings and can charge for.

Consumers may wish to pay an annual fee for your service or you may wish to sell pre-roll advertising that is required viewing to fuel your business model but I fear that you will be disappointed if you think the entertainment providers will pay for something that does not give them a benefit and does not give advertisers guaranteed viewership.

@John Zamoiski TV networks are paying and will pay. There is no question that they are getting value from Shobot.
Since 2007, ad rates are based on C3, which considers DVR viewing within 3 days of live. Soon it will probably be C7.
While C3 means something to our business model, not too much. That's because Shobot does not aim to drive ratings directly. Shobot drives sampling. A single top show might cost $40MM plus $5MM to promote. Yet nearly half of all shows fail (are not renewed). Before a show can rake in all that VOD money, it must succeed, meaning garner a linear living room fan base. To pull that off, a lot of people must sample the show. TV networks lack any way to measurably drive sampling. Shobot provides that.
Ten (maybe even five) years ago TV networks hated the DVR because they perceived it as a pure threat. Last week a Fox SVP told me, "We have a love/hate relationship with the DVR." Turn on Fox News any evening and you will hear the anchors urging viewers to "Set your DVR." In 2013, NBC urged fans to DVR The Blacklist in their promotions, and it the most DVRed show ever, to which NBC partially attributed it's success.
We have talked to scores of TV network execs, and the objection you're raising rarely comes up. In today's fragmented landscape TV networks must attract and retain loyal viewers. DVRs help viewers of a dramatic series to avoid getting hopelessly behind. They help sports viewers keep from missing the first few plays so they don't have choose between watching the game and stopping for milk on the way home. And through Shobot, it helps TV networks drive sampling and adoption. We have found that today's network execs appreciate that these benefits accrue to them.
Then there are commercial free networks, both premium and standard.
Sure MVPDs have their own remote scheduling sites. But which call to action would you place on an ad? "Click to DVR it" or "Visit your cable or satellite provider's remote scheduling site now, log in, search for this show and then DVR it." Also, you can only set your DVR from those sites (or even the box itself) after the show appears in your program guide, in some cases no more than 5 days out. With Shobot, you can schedule a recording at any time. TV networks now have a way to promote their shows, including testing and refining ad creative and UX, weeks or even months before the premier date. Without Shobot, tune-in promotions rely on human memory, a weak thing, so they are usually clustered only a day or two before the premier.
Like any startup, we have objections and obstacles to overcome. Disdain for the DVR by TV tune-in promoters is not chief among them.