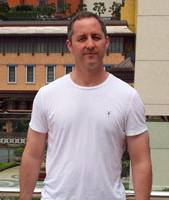 ANDREW PEARSON was born in Pakistan, grew up in Singapore and was educated in England and America. With a degree in psychology from UCLA, Pearson has had a varied career in IT, marketing, mobile technology, social media and entertainment.

With producer Gwen Field, Pearson optioned and adapted the novels Open Water, The Sunday Macaroni Club, The Jukebox Queen of Malta, Scavenger Reef, Fugitive Moon, and Snakes in the Garden, attaching such talented directors as Kevin Hooks, Fraser Heston, Mark Lester, Diane Ladd and Jorge Ramirez-Suarez to their proejcts. Pearson's script for The Sunday Macaroni Club was a Quarter-Finalist in the 2004 Zoetrope Screenwriting Competition and The Flirting Game was selected as a Finalist in the Fourth Screenplay Search Competition.

In 2009, two books that Mr. Pearson edited appeared in print; the first in the Double Down on your Data series, Clive Pearson's How Analytics is Revolutionizing the Casino Industry and Santiago Maggi's Investment Strategies for Uncertain Markets, a book about the financial markets that presciently predicted the 2007 global financial meltdown. In 2010, Pearson also wrote The Mobile Revolution and it was published by Qualex Publishing. In 2013, Pearson was invited to write a chapter in Global Mobile: Applications and Innovations for the Worldwide Mobile Ecosystem, a book on mobile technology. The book, which was co-authored by several of the mobile industry's leading figures, was published in July 2013.

Pearson is also a noted columnist, writing on topics such as mobile media, social media, predictive analytics and cloud technology for such publications as ComputerWorld HK, The Journal of Mobile and Social Media Marketing and The Mobile Marketer. Pearson is also a member of the editorial board of the upcoming Journal of Business-to-Consumer Marketing as well as the president of the Advanced Analytics Association of Macau.

An avid traveler, Pearson is a sought-after speaker on such disparate topics as casino and mobile marketing, data analytics, social media and interactivity. If he's not pounding the pavements of Hollywood, he's probably wandering the labyrinthine streets of Hong Kong's Lang Kwai Fong, or tearing up useless betting slips at Happy Valley (perhaps the most perfectly named racecourse in the world (for some)), or dining at a hawker center in Singapore, or doubling down at the gaming tables in Macau. Basically, Pearson's trying to find the next great story that the world doesn't yet know that it desperately wants to see.

Intelligencia Limited is an analytics and social media consulting company working in the gaming, lottery and sports betting industries.