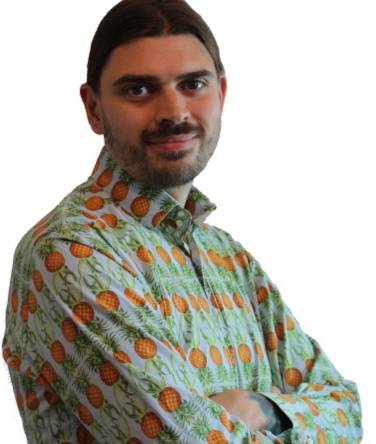 Strategy, vision, logistics and technology in one human-shaped being

Looking for a co-founder to join Zapple and help us to reinvent the banking sector. We're changing how banking works. If you're interested, get in touch.

Zapple is a digital asset exchange and future bank that is currently fund-raising. We'll be launching our first current accounts in early 2020 and will become the first asset-agnostic banking platform.

I founded Piña Vida because I saw a gap in the market. Software deliveries fail at so many companies. I've worked in consulting capacities, as an employed developer/architect and as a contractor. It's rare to find companies that manage to deliver everything they want. More often than not this is because most businesses just aren't tech companies. So many companies try to outsource development but the body-shopping and day-rate culture that's become the norm leads to a team of developers who don't understand a business under-delivering at exorbitant day rates. In an age defined by software this just felt insane and I wanted to come up with a better model. We deliver software projects. We don't body shop, we won't take on a project that we cannot deliver and we don't work to a normal model. Most companies aren't tech companies at heart and encounter any number of problems delivering software with internal teams or outsourced partners. There are internal politics at play, different business units disagreeing over direction and development teams that don't truly understand the niche complexities of the business. We take a different model. We grow a team of experts within our own business that are dedicated to our customers with one goal - delivering. We don't work on day rates, we don't just drop people in and out of an account. When we take on a project we take on the risk that comes with that and we're incentivised to deliver for you.

Responsible for software architecture, key development and technical leadership on a business-critical C# internal application used by De Beers. • C# development in a highly-distributed workflow application that processes over 30,000 stones per year • Responsible for solution architecture and strategic direction of the Forevermark system • Led development and re-architecture and replacement of legacy WinForms application to a WPF / MVC 4 Web API stack which has provided an 20% increase in capacity through performance increases and process change • Implemented coding and architectural standards for use throughout Forevermark • Architected and implemented a solution to introduce a new critical piece of hardware using a network control protocol that has seen project cost cut by 50% of its initial estimate • Significant amount of work integrating hardware solutions • Technical mentoring to more junior members of the team both on-shore and off-shore • Oversaw key upgrade project moving the application from a Windows Server 2003, XP and SQL Server 2005 technology stack to Windows Server 2008 R2, Windows 7 and SQL Server 2008 – including large amounts of hardware integration written from scratch to replace unsupported 32-bit components • Technical management of other contractors and external suppliers • Reduced number of support tickets raised by business users by introducing functionality to allow them to self-manage • Decreased time a software release takes from 9 hours to 2 hours through use of bespoke release tool in WPF using PowerShell automation • Worked closely with infrastructure and client support to develop roll-out plans for the upgrade of workstations without impacting trading time • Project managed for a period of two months in addition to standard roles • Introduced load-balancing to increase resilience of the application and remove SPOFs • Assist third line support to resolve production issues

Hired by a start-up to develop the first version of their API for use in a mobile app to display parking information for London boroughs. • Architected initial design for solution and provided designs for future enhancements • Designed around a scalable solution in the Amazon EC2 environment required to provide dynamic capacity to a large number of clients • Worked on efficient geo-fencing techniques using an in-memory sort on servers to support rapid responses to client applications for a large dataset • MVC Web API created in C# for application to access all information that is required • Secure API created for maintenance of data in the application by a management app • Security consulting provided for securing data at rest on a mobile device as well as in transit • Basic web page created for company

Led a development team of over ten developers in Prague/London and responsible for the company’s strategic direction for all customer-facing software development. • Managed between 3 and 5 simultaneous projects at any one point between a team of contractors, full time employees and outsourced development talent working on C#, Mac OS, iOS and Android platforms • Budgetary control of £1.5 million • Implemented XP and Scrum practices on all projects including technical practices such as continuous integration • Changed to agile software development methodologies • Roadmap implemented to re-invigorate all products • Updated architecture to require all projects to implement true service-oriented-development • Implemented more suitable test and release procedures

Hired to lead up the technical direction for a new team within Capgemini offering bespoke mobile solutions for clients. • Created agile ways of working within team • Implemented full end-to-end enterprise app store fully integrated with an iOS continuous integration system based on Hudson o Front-end developed in Objective-C for iPhone and iPad o Creation of RESTful web services (.Net and SQL Server) o Hudson for continuous integration with custom scripts • Worked on internal Capgemini iPhone app to showcase capabilities including augmented reality • Developed reusable iOS frameworks which halved development times on other projects • Created multi-threaded, multi-tenant push notification services for use across projects in C# • Managed other developers both on-shore and offshore during projects • Created mobile strategy with strong focus on security for a UK city council’s mobility plans • Architected and implemented security solution to transmit and store secure documents on an iPad for a Scottish government agency adhering to highest levels of government security • Significant work defining the company’s security strategy for mobility having written the Capgemini whitepaper for the topic • Sybase Unwired Platform certification achieved – with only 10% of the class obtaining certification

I worked for Hewlett-Packard during a placement year in my degree within the enterprise storage team converting an old ASP web application to a C# ASP.Net stack which increased page response times over 100 fold due to caching data layer I created. Other work included single-handedly developing a low-level SCSI scanner using C for Linux and Windows platforms to assist support teams probing a storage area network.

I founded an online music magazine to fill a gap in the market in 2003 whilst a student and created the full technical stack in Apache, MySQL and Perl required to support the staff, automated processes and a custom CMS. I grew the site to over 250,000 unique visitors per month and 50 members of staff and put on a musical festival in 2005 with over 2,000 attendees and 7 bands from across Europe.